These Healthy Crockpot Chicken Recipes are perfect for meal prep – dump in all the ingredients then set it and forget it!

Looking for an easy and hands-off dinner idea? These healthy crockpot chicken recipes are where it’s at! The slow cooker is one of my favourite meal prep tools when I want to just dump everything in a pot, set it and forget it. I rounded up some of my favourite crockpot recipes that will make meal prep and dinnertime a breeze.

Learn how to meal prep the better, faster way!

The ingredients in all of these slow cooker recipes are very basic – you might even have some of them in your fridge or pantry already. Most of the sauces you’ll marinate the chicken in have less than 5 ingredients. From there, you can serve your crockpot chicken with a couple of veggies and any type of starch. Trust me, these meals are super easy to throw together and are so good.

How to make crockpot chicken

Can you cook frozen chicken in a crockpot?

The short answer is you can, but it’s not recommended. Depending on who you ask, this topic can be controversial, so let’s just deal with the facts.

According to the U.S. Food and Drug Administration (FDA), foods need to be kept at certain temperatures to maintain food safety standards. If food isn’t stored properly, you run the risk of food contamination and contracting foodborne illnesses like Salmonella. Regarding meat and poultry, the FDA says this:

“Bacteria grow most rapidly in the range of temperatures between 40 °F [4 °C] and 140 °F [60 °C]doubling in number in as little as 20 minutes. This range of temperatures is often called the “Danger Zone.” Never leave food out of refrigeration over 2 hours, and if the temperature is over 90 °F. don’t leave it out over 1 hour.”

The problem is, it can take a long time for frozen food to thaw in a slow cooker, especially when cooking on the low setting. After frozen chicken thaws, it has to reach an internal temperature of 165 °F (74 °C) to be safe to eat. Depending on the size of the frozen meat, that can take longer than 2 hours.

The safest thing to do is to thaw frozen chicken fully before cooking it in a slow cooker. Remember to use a cooking thermometer to make sure that the chicken is fully cooked before eating it, too.

If you’ve wondered where to start on making crock pot chicken, these five recipes below will save your meal plan!

Chicken can dry out if it’s cooked for too long in the crockpot. These recipes have more liquid ingredients than a simple marinade for just that reason. Plus, all of the liquid goes into the crockpot with the chicken, even if they sat together in the refrigerator for a while first.

These recipes are great for meal prep! Store the chicken and marinade ingredients in a Ziploc bag for up to 2 days before you plan to cook them.

If the chicken is frozen, you don’t need to thaw it before sticking it in a bag with the rest of the ingredients. This is a great way to thaw chicken the day before you want to cook it and it’ll defrost with the marinade ingredients. Store the bag in the fridge and the next morning, just dump it into the slow cooker.

There are so many amazing and talented bloggers creating new recipes that making healthy crockpot meals has never been easier! You can find healthy crockpot chicken recipes for every dietary need and in nearly every cuisine you want. Whole30, gluten-free, paleo… you name it!

Whether you want to cook with chicken thighs, breasts, or a whole chicken, you can find a recipe for it in the collection below! 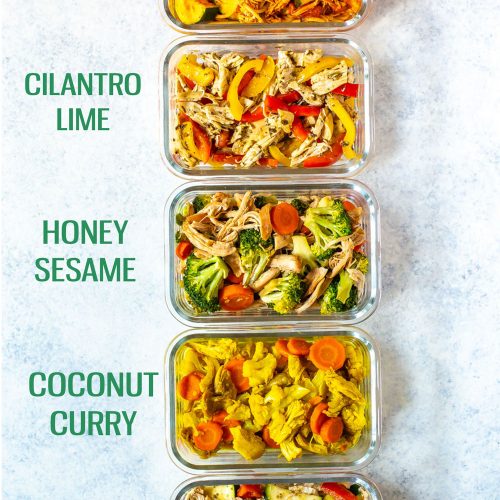 These Healthy Crockpot Chicken Recipes are perfect for meal prep – dump in all the ingredients then set it and forget it!

Key Partner in Covax Will End Support for Middle-Income...
Gaming laptop deal: Save $450 on Asus 14-inch ROG...
When a startup’s founders are pretty much its board...